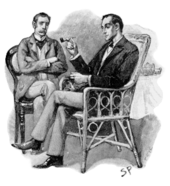 I started a new job last week. For thirteen years, I’ve been at the chalkface / whiteboard / interactive digital medium, facing pupils / students / a learning focused (ha!) client base. Now, instead, I’m working in a… but this isn’t what the post’s about, so I’ll save that for another time.

What’s curious is that for the fragrantly obsessed, any opportunity can be given over to scented rumination. My colleagues are very bright, articulate enthusiasts who love to do a good job but who, with one or two exceptions, know diddly squat about me. And in Britain, you generally don’t ask a whole heap of questions to a newbie, even if you’re gagging to. I’ve already put my neck on the line by commenting twice on people’s scents (for the inquisitive, a trace of Prada on one, an unnamed chypre on another). So, for the moment, or at least for as long as I can keep my flappy trap shut, I’m an enigma (apologies to March), an aporia (and again), a tabula rasa.

When my head isn’t whirling with its induction hurricane – hello, there goes the house, Dorothy and Toto; here comes the pointy faced old bat on the bicycle – I’ve given some long and hard thinkage to what scents to wear in my first few days on the job. Alongside two other priorities of course – a) working out how to access the posse at work given that the office is an open-plan, hot desk style thingamijig; b)actually doing some work. It’s important to me that I don’t overpower my new workmates with a potent fume-arama, but they’ve gotta get used to the idea that I smell different, every day, and am likely to for the next 50 days, at the least. So here’s what I’ve worn so far, and possibly why.

Day 1 – If I was to take all my scents, and attempt to extrapolate a core identity from them, it’d probably say ‘favours spice more than not; favours orientals more than not’, if nothing else. I don’t only wear scents of this kind, but I seem to have more of them than anything else. So, for my first day in the office, I opted for Costes, a lavender and spice melange that is light enough (that Giacobetti touch truly is the equivalent to choux in the pastry chef’s world – her perfumes seem beaten with air) to be a transparent suggestion of scent even whilst, on me at least, it lasts and lasts. And it’s as ungendered as you can get – in fact, to the uninitiated, it probably smells soapy clean and classy, and that’s something I’m happy to be associated with on my first day. It was, at least recently, half price in Barney’s.
Day 2 – sticking with the soapy clean thing, I wore Bvlgari pour Homme. Created by Jacques Cavallier – more famous for Stella, l’Eau d’Issey, M7 and the uber-synthetics, Ultraviolet Man and Woman – in 1995, this has Bvlgari’s trademark tea notes alongside a blend of citrus and musk. On their website, Bvlgari claims this has a ‘strong masculine personality’, but it doesn’t really, at least not in the conventional sense. It’s a disappearer-repeater, seemingly having left without a trace one moment, only to reappear a little later. A crystal clear perfume of high quality, which makes you feel unscentedly scented.

Day 3 – you know, I can’t remember. What, you expected me to make notes?

Day 4 – I read somewhere once (probably on another blog – sorry for not remembering!), about how citrus scents are supposed to make you seem like a go-getter type, with your eye on the ball. Inspired by all the Nicolai talk in these here parts and maybe that thought (hey, I might trick myself into believing it!), I wore Balle de Match. I love how this starts in grapefruit and.. is that blackcurrant? Something else… before drying down into a mossy, woodsy blend. It’s what to wear when you don’t know what to wear.

Day 5 – the secondhand Dior suit was pulled out the cupboard: I had a presentation to do to a sceptical audience of 150. I looked smooooooooth. Dior Homme, naturally. Now, this is a POWER aroma – no more than two sprays under the shirt for faint wafts of cocoa- and cardamom-dusted iris loveliness all day long. Those cynics ate out of my hands. If you go somewhere like Basenotes, you’ll see the mixed response this fragrance has received. I can only say I’ve had some of my best work days wearing it, even if I am smelling like a make-up bag.
Day 6 – sticking with the Dior theme, Bois d’Argent. I love this stuff. It’s got iris, honey, incense and myrrh. There’s a woody quality to it too, but once again, it stakes its ground firmly in unisex territory. I was initially irritated by the size of the bottles when I bought this – how’s a scent addict going to get through 125ml of anything? 2 years later, only a third is left. So much for my irritation. It’s not an overpowering scent, but it does last all day, wafting waves of golden green goodness (I don’t get the silver of the name so much) wherever you may roam. And I can’t sing its praises enough, even though no-one in my new job has yet to do the same. We’re British, what can I say?

To win samples of these ‘induction’ scents, leave a message below telling us what you’d wear to a new something or other, and why. I’ll announce the winner in next week’s Fourplay.