I don’t frequent perfume forums (fora?) as much as I used to, but I know that, alongside the ‘What (never Which…) colognes do chicks really dig?’ style questions, another frequent one, sometimes in poll form, is ‘Who do you wear scents for?’

The question puzzles me, for its starting point seems slightly wonky. Perhaps it’s age, self-absorption, or some other fault of mine, but I can’t imagine wearing scent for anyone. I wear them purely for personal pleasure. I think it was commenter Elle who recently wrote about scents transporting her from the real to the unreal, or out of the quotidian and into the quixotic. And that’s what they are for me. A profoundly personal and often private ritual, a personal journey into a fantastic elsewhere. In fact, I’m easily embarrassed by people – acquaintances rather than friends – asking me what I’m wearing, as daft as that seems. I’d rather be thought of as nude, scentwise, than be asked by one of the uninitiated what my scent is, which makes me feel nude clotheswise (as nice as it also is to be complimented of course). As though my private place, my solace, has been invaded.

Oh, ain’t I being precious today? But this private pleasure, that I’m happy to share somewhat anonymously over the internet, is both trivial consumption and profound experience. Scents are the closest I often get to awe and wonder. Baby, they’re my religious experience – a world outside of words, a world of marvels.

In case you didn’t spot it, that’s my segueway into incense scents. Burnt material used to cover the stench of the huddled masses at worship, now transformed in the modern age to personal perfumes. Wondrous really, isn’t it? I have mixed feelings about them and until recently, thought I had gone off most of them completely. I was wrong.

Incense scents often appear have a narrow colour palette, and they’re easily seen as monotone and ascetic in nature. Two benchmarks at this end are Armani’s Bois d’Encens and Comme des Garcons’ Avignon. 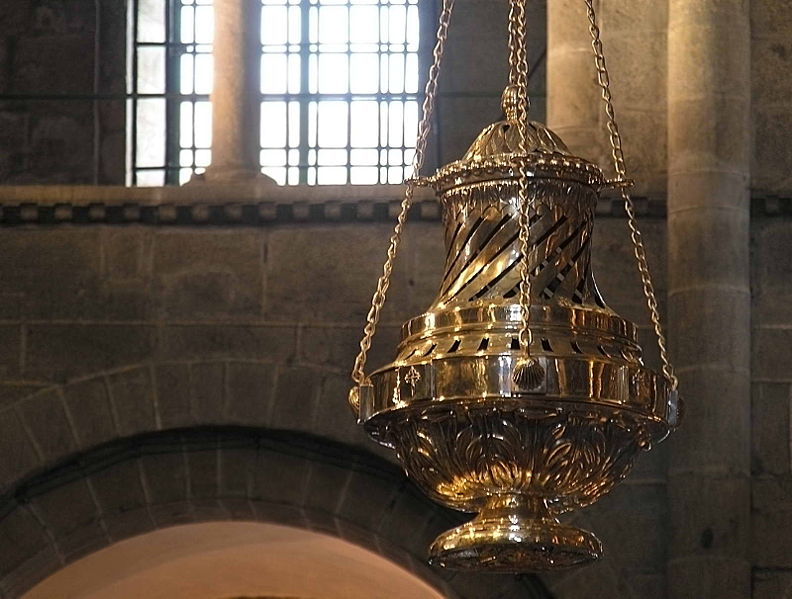 Of the four incenses I’m reviewing, the Armani is probably the simplest. Cedar – tick. Frankincense – tick. Pepper – tick. Vetiver – tick. It’s fairly diffuse too and surrounds the wearer like an aura. However, it’s more an aura of chilly minimalism than high mass, though that peppery kick sometimes reminds me of similar masculine accords in scents like Gucci pour Homme and CDG 2 Man. If this is a church, it’s way too styled for the huddled masses. I think that have a strict door policy – only black outfits, perhaps a touch of grey here and there. Next!

I used to own Avignon but I shipped it to a dear friend who loves it more than me. It’s a remarkable fragrance – the closest it’s possible to get to the cathedral at Santiago de Compostela without visiting. It’s not pure frankincense, but close enough to seem like it might be, and I’m sure I detect some cinnamon in there. But it is being in that cathedral, queuing up with the devout and the curious to touch the foot of the Trinity, the lingering aroma of the botafumeiro – a huge, swinging censer – and the damp of the stones from the humid Atlantic weather of north western Spain. I’ve been to the cathedral at Avignon, though I have no real memories associated with it. Santiago will have to suffice.

For the next two, ostensibly incense scents, my words’ll be limited. Because, though they dilute the purity of of smoke and faith, their beauty is essentially ineffable. The first, because it’s glamorous, sparkling, colourful incense and the best thing I bought in 2007. I’ve hinted here how much I love Amouage’s Jubilation XXV – and oh, I do, I do, I do. It has depth, richness, vibrancy and symphonic range in its harmonising of ingredients. It opens with a fruity, tart-sour accord, a signature motif in many of Bertrand Duchaufour’s compositions
(though not in Avignon or Kyoto, it has to be said). However, it doesn’t stay there for long, instead using a whole orchestra of colour around frankincense to brighten the familiar note. And yet it’s restrained, never brash, and makes you smell goooood, rather than feel like the perfume’s wearing you. In fact, it transforms me into the epitome of chic and debonair, and that’s some feat I tell you.

The last incense from me is one of my holy grail scents, Serge Lutens’s Encens et Lavande. I first smelled this early on in my journey into niche. Who’d’ve thunk that incense, lavender and a smidgeon of sage (or a whole heap of aromachemicals and naturals masquerading as a trinity) could smell so good? Though I would guess there’s a touch of immortelle there too – at least this perfume started my love affair with that accord. And maybe some amber? It’s the ultimate transporter for me. I can be stressed out of my nut, doolally, off my rocker, flying with the birds; a sniff of this will bring me both back into who I am and away from all the small stuff that we all, too often, sweat over unnecessarily. It’s calm captured, or the last thing to fly out of Pandora’s box bottled by that necromancer of molecules, Sheldrake. If you’ve never sniffed it, please remedy this serious fault (sin?) now. I said NOW.

Of these four (or three or two…), which is your favourite and why? And don’t forget to tune in tomorrow where March reviews two incenses I’ve failed to sniff, and one I hope to avoid sniffing for the rest of my mortal existence. I’ll sniff it enough afterwards…

Image of the Botafumeiro courtesy of wikimedia.